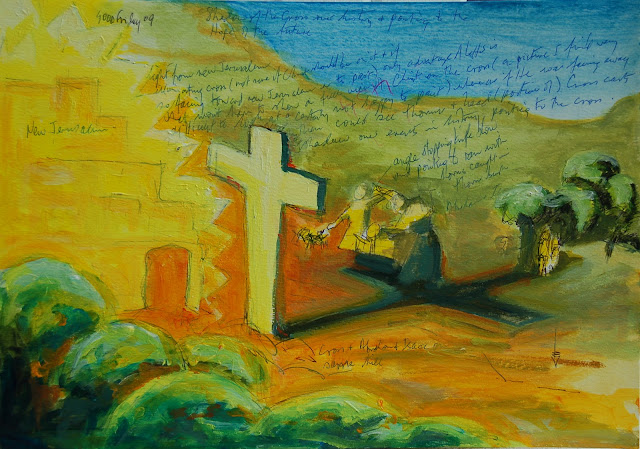 Here the Cross stands as a beacon indicating the end of an era and casting a shadow over milestones which point to it as a necessity as well as introducing the concept of sacrifice to atone for sin.

Adam and Eve missed the mark and sold out the human race to evil, comitting high treason.  Nevertheless, God supplied clothing in the form of animal skins obtained form an innocent animal which He killed.  Already at this early moment the stage was set for the Cross.

Next in the picture is the amazing scene where God has asked Abraham to sacrifice Isaac.  Here God was testing Abraham (who was in blood covenant with God) to see if he would be willing to accede to God's request that he sacrifice Isaac, his only son.  This is the love of God, that He (Jesus - here described as an Angel of the Lord) stopped Abraham just in time and pointed to a ram with it's horns caught in the thorns as a substitute sacrifice.

This action by Abraham paved the way for God to sacrifice His only Son.  It is astounding that this all took place on or near the hill where Jesus was crucified so many years later.  The detail boggles the mind, because when He was crucified, He was wearing a crown of thorns!

The yellow glo is from the Heavenly Jerusalem which, in this picture, points to the future - when God will live with us and we will see Him.

Much has been left out of the picture, but it does show how the Cross was anticipated.  It represents a solution to God's epic battle with evil and gives us the opportunity to become children of God by faith in Jesus as the Perfect Sacrifice.